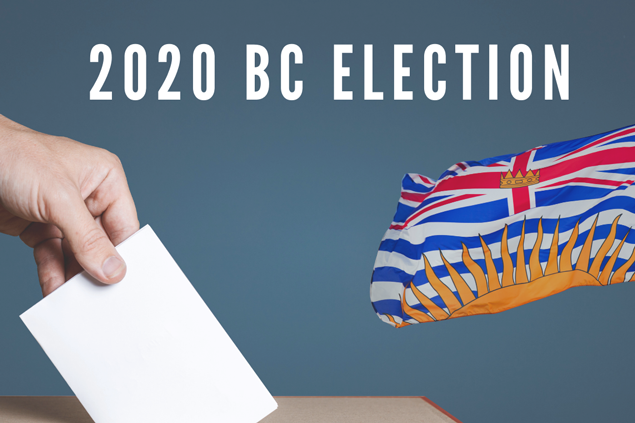 Just as in previous elections, the Confederation of Canadian Unions is once again establishing a political education campaign, named BC Workers Vote, to help its membership make informed voting choices for the British Columbia Election on October 24, 2020.

The thirteen questions below have been sent to all four major parties in the province, including the Conservative Party, the Liberal Party, the New Democratic Party and the Green Party.

The Conservatives and Liberals have not yet given us their responses.


Read the party’s responses by clicking on the logos below

The Confederation of Canadian Unions (CCU) is the nation’s largest federation of independent labour unions. Founded in 1969 on the initiative of labour organizers Kent Rowley and Madeleine Parent, the CCU is dedicated to the establishment of a democratic, independent Canadian labour movement. The CCU includes members in affiliated unions across the country in both the public and private sectors.

The CCU is establishing a political education campaign to help its membership make informed voting choices for the 2020 British Columbia general election. The following questions will be sent to all four major parties in the province, including the Conservative Party, the Liberal Party, the New Democratic Party and the Green Party.

If you have any questions, please do not hesitate to contact me by phone or email. And thank you for participating.

1. The COVID pandemic has put workers in numerous industries at enormous risk. For those lucky enough to have kept their jobs, many report wage cutbacks or reduced working hours. While those suffering from unemployment created by the pandemic are surviving on the bare minimum. What actions will your party take to protect working people and keep them safe from COVID, both on and off the job?

2. Statistics Canada reports unionized workers receive higher wages than non-unionized workers in the same line of work, as well as stronger pensions, safer working conditions, longer paid vacation time, better health and drug benefits, and more rights in the workplace. Does your party believe that unions play a positive role in our economy? If so, what policies will your party implement to create a climate that is easier for unions to organize?

3. Over the past decade in British Columbia, an average of 150 workers die on the job each year, and 17 workers in the province are permanently disabled from workplace accidents every day. What will your party do to guarantee better health and safety conditions to reduce workplace injuries and fatalities?

4. A recent Environics Research poll showed that 90% of British Columbians think there should be income tax increases for the wealthiest income earners, and 67% believe that major corporations pay less tax than they should. Does your party believe that those who benefit the most should pay their fair share of taxes?

5. The resource extraction-only policies have left this province split. Urban areas are seeing growth and opportunities like no other jurisdiction in Canada, while rural British Columbia is seeing negative growth, increasing unemployment and limited job prospects. What plans does your party have to encourage secondary industries to invest in rural British Columbia?

6. Most economies throughout the western world have been on a general five-day workweek for almost a century. Yet with the COVID pandemic, some governments are considering legislating a four-day workweek to protect workers, create jobs and free up time for the overworked. What is your party’s view of moving the BC economy to a four-day workweek?

7. Our publicly administered, universal health care system is cherished throughout British Columbia. What policies will your party implement to ensure that health care in the province remains under public control and is accessible to everyone?

8. There are thousands of people in the province on waiting lists for surgery, home care, and finding a family doctor. What will your party do to fund more doctors, nursing positions and hospital beds throughout the province, and ensure that our health care system is there for us when we need it?

9. One of the most important policies for creating a better education system is reducing class sizes. What specific policies will your party implement to hire more teachers and reduce class sizes in primary and secondary schools in British Columbia?

The Environment and Resources

11. Each year, millions of raw logs and other natural resources are shipped to value-added industries in other countries. What specific plans does your party have to prevent this and instead create high-value secondary industries in British Columbia?

12. British Columbians care deeply about our environment and believe that climate change is a major issue. What will your party do to reduce our carbon footprint and help lower greenhouse gas emissions?

13. Where does your party stand in relation to Indigenous rights? What plans do you have to ensure meaningful discussions about the integration of Indigenous peoples into the forestry and mining sectors and areas of the economy that flow from their traditional lands? How will your party work to end the many social injustices faced by Indigenous people from across BC?