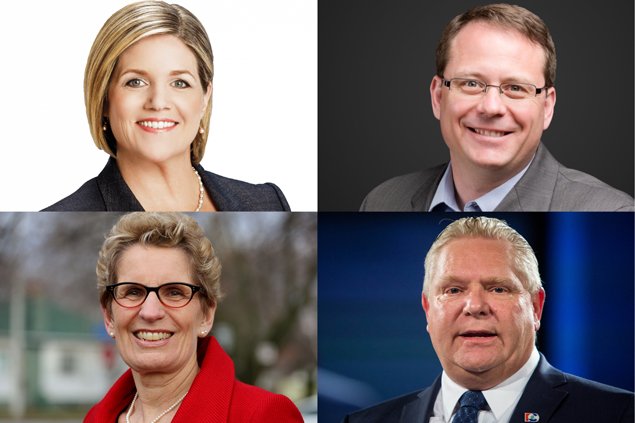 Like previous federal and provincial elections, the Confederation of Canadian Unions has once again established a political education campaign, named “Raise Your Voice, Cast Your Vote,” to help its membership make informed voting choices for the Ontario Election on June 7, 2018.

The 13 questions were sent to all four major parties in Ontario, including the Progressive Conservative Party, the Liberal Party, the New Democratic Party and the Green Party. The answers from each party are posted below.

Download the responses by clicking on the logos below:

The Progressive Conservatives have not yet provided their responses to our questionnaire.

1. According to Statistics Canada, economic inequality has been on the rise since the 1970s, and currently, the richest 10% of income earners control almost 60% of all wealth. How will your party reverse this trend and reduce the growing levels of economic inequality in Ontario?

2. The partial sell-off of Hydro One has been a boondoggle for Bay Street, Wall Street and the investment class, and a disaster for workers and consumers. Rates have skyrocketed for Ontarians, and the Ontario Financial Accountability Office stated that taxpayers would have saved $1.8 billion if the government had taken on traditional debt to fund infrastructure projects instead of the sell-off. Will your party commit to fully returning Hydro One back to public ownership and democratic control?

3. According to opinion polls, a large majority of Ontarians support greater funding for social services like health care, child care, housing and education. What will your party do to ensure these programs are properly funded in both the short and long term?

4. Statistics Canada reports that on average, unionized workers in Ontario enjoy 24% higher wages than non-unionized workers in the same line of work, as well as stronger pensions, superior health and safety standards, longer vacation time, better health and drug benefits, and more rights in the workplace. Does your party believe that unions play a positive role in our economy? If so, what policies will your party implement to create a climate that is easier for unions to organize?

5. Last year, Canada joined 164 other countries in ratifying International Labour Organization (ILO) convention 98, which commits governments around the world to respecting union rights and collective bargaining. Will your party commit to protecting the rights of unions to organize and bargain collectively, both in the public and private sectors?

6. Our publicly administered, universal health care system is cherished throughout Ontario. More of our health services, however, are being de-funded and privatized. What policies will your party implement to ensure that health care in the province remains under public control and is accessible to everyone?

7. There are more than 30,000 people in Ontario on waiting lists for long-term care beds, and hundreds of thousands are actively seeking but cannot find a family doctor. What will your party do to fund more doctors, nursing positions and hospital beds throughout the province?

8. Canada remains the only country in the world with a universal health care system that doesn’t include prescription medication. Drug prices continue to skyrocket for Ontarians and more people have to choose between getting the medications they need and paying for necessities like food or rent. Will your party commit to creating a universal, comprehensive, publicly-administered and sustainable Pharmacare program in the province of Ontario?

10. What specific policies will your party implement to hire more teachers and reduce class sizes in primary and secondary schools in Ontario?

11. Ontario university student debt is now over $850 million, and our province has the highest undergraduate tuition fees in the country, more than twice as high as Quebec and Manitoba. What will your party do to lower tuition fees and reduce student debt?

12. What policies will your party implement to reduce climate change and protect the environment, and how will you pay for them?