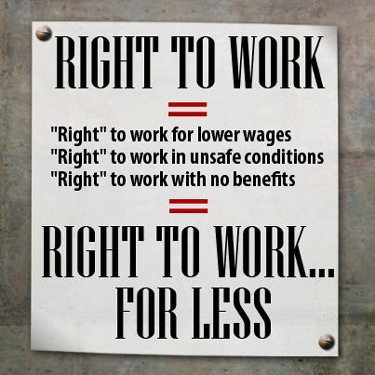 By Past President Joanie Cameron Pritchett

“In our glorious fight for civil rights, we must guard against being fooled by false slogans, such as ‘right to work.’ It is a law to rob us of our civil rights and job rights. Its purpose is to destroy labor unions and the freedom of collective bargaining by which unions have improved wages and working conditions of everyone… Wherever these laws have been passed, wages are lower, job opportunities are fewer and there are no civil rights. We do not intend to let them do this to us. We demand this fraud be stopped.”

I very rarely use quotations to open an article, and when I do, it has to be really important. The one above wasn’t stated by a union leader or any labour activist in North America, nor was it recently published in any left-wing newspaper or magazine.

The fraud of so-called “right to work” laws isn’t new. It’s been around since the 1940s, when unions and progressive politicians worked tirelessly to pass legislation providing workers the right to form unions and bargain collectively.

Not surprisingly, Big Business has been obsessed with overturning these policies, spending hundreds of millions of dollars on campaigns, political parties, research think tanks, public relations and various media formats to condition workers into believing that what is good for Wall Street is good for everyone.

Michigan recently became the 24th state in the U.S. to pass “right to work” laws, which make it legal for unionized workers to not pay dues to their union for its services, including everything from collective bargaining, to education and training, to benefits. The Republican governor – with a straight face – referred to it as “pro-worker.”

If you think this is only an American issue, just wait. Conservative MPs in Ottawa have put forth private members bills that would make it legal for public sector workers to avoid paying dues to their unions.

Labour unions, like any other organizations, depend on dues to function. In Canada, union dues are just over 2% of wage earnings, and are 100% tax deductable as well. That’s a very small price to pay for the benefits of belonging to a union, including an average 29% higher pay than non-unionized workers, according to Statistics Canada.

I wonder how the U.S. Chamber of Commerce, the leading pro-corporate organization in the country that has lobbied for right to freeload legislation for decades, would feel about a new law that would make it illegal for them to charge dues to their members.

Looking at the statistics on right to freeload legislation makes it almost too easy to oppose the policy. Research from the Economic Policy Institute shows that in states with those laws, average incomes are $1,540 less and median household income is a staggering $6,437 less than the national average. In addition, workers in those states are less likely to have health insurance, and they suffer from poverty and infant mortality rates that are 15 percent higher than the national average.

As for “job creation,” most economists argue that right to freeload has little impact on overall unemployment rates, since there is both downward pressures on wages and consumer spending as well, which makes any job gains or losses negligible.

Yet who am I to let silly things like “facts” or “statistics” get in the way of failed, pro-business policies?

If you think this is only an American issue, just wait. Conservative MPs in Ottawa have put forth private members bills that would make it legal for public sector workers to avoid paying dues to their unions.

If they were really interested in a “right to work,” as in a right to a job, which millions of Canadians go without every single day, they would actually help working class and modest income earners increase their wages, which would heighten consumer spending and decrease personal and family debt. That’s how real jobs and created in our economy, and sustained.

Creating the right to freeload in Canada would be yet another privilege used by the very wealthy and powerful to lower working conditions, wages and other benefits, both in and outside unions. It is a race to the bottom that Canadians should do everything in their power to avoid.