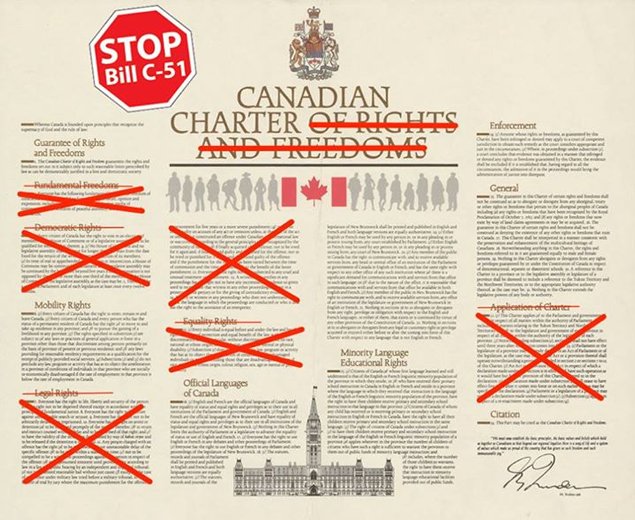 Documents made public in 2014 by the Toronto Star revealed that since 2006, 800 demonstrations and events had been subjected to the scrutiny of government agencies and departments.

The range of events that were targeted was very broad and were typical of a vibrant democratic society. They included a union demonstration, a public forum on the tar sands, a workshop on civil disobedience, a vigil on disappeared and murdered Indigenous women, and a fishermen’s demonstration in the Maritimes.

In Canada, a person is a thousand times more likely to be injured or killed through a collision with a moose or other animal than by a terrorist attack. This statistic is not meant to downplay security threats, but rather to put them in perspective.

Bill C-51 doesn’t constitute a balanced security approach in line with the real level of threat in our country. Rather, it constitutes an approach based on sensationalism, flawed ideology, and the politics of fear.

The appropriate oversight of CSIS (Canadian Security Intelligence Service), the RCMP (Royal Canadian Mounted Police) and other government agencies, the maintenance of Charter protections, and adherence to privacy legislation are all vital to a just and democratic approach to national security.

The criminalization of free speech, protest and dissent is unacceptable. Has the government learned nothing from history regarding the actions taken in the interest of “national security”? Such as the detention and torture of innocent people based on information provided by Canadian “security agencies,” or the spying on and infiltration of unions and social justice organizations by CSIS and the RCMP?

We cannot have a secure country where a climate of fear causes us to accept regular violations of our basic rights and freedoms. This is a false choice that is not necessary. There are already significant protections in place. We do not need to trade our freedom for security.

Below are the CCU’S responses to the national security consultation of the government of Canada presented in cooperation with our partner, The International Civil Liberties Monitoring Group.


Letter from Confederation of Canadian Unions