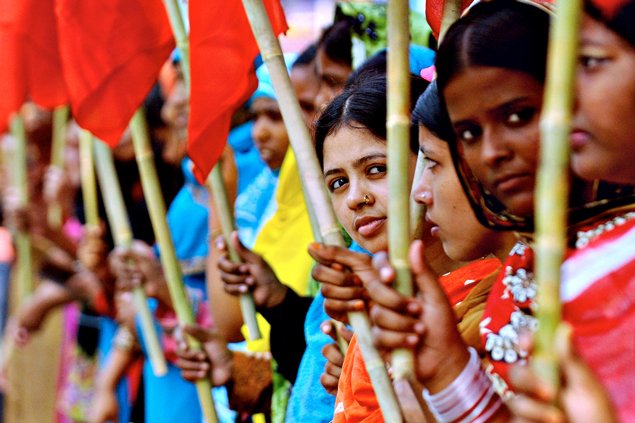 In 2013, the Rana Plaza building collapse in Bangladesh killed over 1,100 factory workers in the garment sector. Since then, Bangladeshi unions and the global labour movement have fought even harder for stronger health and safety protections and a fair living wage in the country’s garment sector.

And for an all too brief period, some progress was made.

The problem, however, is that multi-national corporations in the clothing industry use their control of the market to drive down the unit price as much as possible, squeezing their outsourced Bangladeshi suppliers at the bottom of the global supply chain and forcing them to disregard health and safety standards and workers’ rights in order to get contracts.

This creates pressure on the Bangladeshi government to lower labour standards in order to attract investment, in a classic example of the race to the bottom that is so often talked about with respect to global trade. The government has caved in to the pressures exerted on it by multi-nationals and engaged in a crackdown on unions and workers’ rights in the garment sector.

Since December 2016, at least 26 trade unionists and workers’ rights activists have been detained, and the homes and offices of trade unionists have been raided. 1,600 workers have been fired and the police have filed charges against 600 union activists. All of this has happened simply because workers and their unions had the nerve to demand a wage increase towards a living wage.

The CCU has joined many organizations in lobbying the governments of Bangladesh and others throughout the world to secure the release of our jailed comrades and end the crackdown on unions and labour rights in Bangladesh.