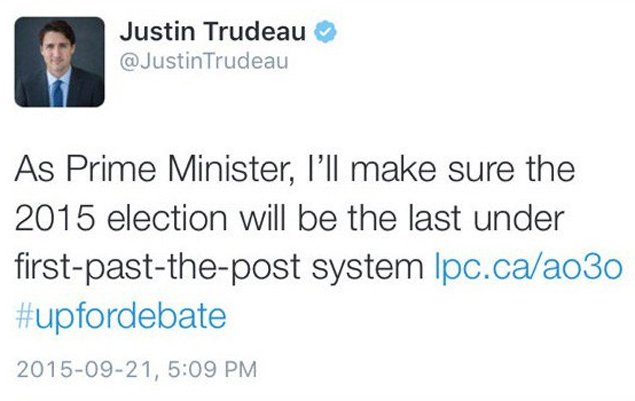 The highlighted text below is a promise made in writing to the Confederation of Canadian Unions by the president of the Liberal Party of Canada on September 28, 2015, in response to our questionnaire on electoral reform from our “Raise Your Voice, Cast Your Vote” campaign for the 2015 federal election (see question 13 on page 13):

“Liberals are committed to ensuring that 2015 will be the last federal election conducted under the first-past-the-post voting system. As part of a national engagement process, we will ensure that electoral reform measures—such as ranked ballots, proportional representation, mandatory voting, and online voting—are fully and fairly studied and considered. This will be carried out by a special all-party parliamentary committee, which will bring recommendations to Parliament on the way forward, to allow for action before the succeeding federal election.  Within 18 months of forming government, we will bring forward legislation to enact electoral reform.”

As a longtime opponent of our first-past-the-post electoral system, the Confederation of Canadian Unions must lend its voice to the many organizations who are expressing disappointment and outrage with the Trudeau Liberals for willfully and purposefully breaking their promise to bring forward legislation on electoral reform within 18 months of taking office.

The Liberals have ignored and betrayed their own committee on electoral reform by refusing to admit that the consultation of Canadians showed overwhelming support for proportional representation, and have unilaterally reneged on the promise for change they made to the entire country.

Trudeau’s broken promise is itself a symptom of Canada’s dysfunctional first-past-the-post electoral system.  The Trudeau Liberals have majority control of the House of Commons with only 39% of the popular vote. This is common under our current system and amounts to giving a license to any newly elected government to do whatever it wants for five years, with limited accountably to Canadians. Our current system is a recipe for broken promises and unilateral government action.

Under proportional representation, governments instead would be held accountable for broken promises and unilateral action in real time, as they would not have a majority in the House of Commons with less than 50% of the popular vote.

The Confederation of Canadian Unions calls on the Trudeau Liberals to keep their promise to Canadians and bring forward meaningful electoral reform, without delay.

The CCU asks our members to join over 100,000 Canadians in signing the petition to parliament, calling on the government to keep its promise and implement electoral reform.